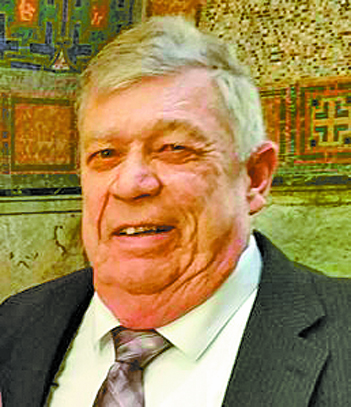 Lane Thomas Anderson, 73, Keene and Williston, died Friday, Jan. 29, 2021, at his home near Keene.
Lane Thomas Anderson was born April 29, 1947, in Minot, to Lloyd and Thelma (Swenson) Anderson. He was raised in Keene and attended elementary school in Keene. He graduated from New Town High School in 1965. He then attended North Dakota State University receiving a degree in agriculture in 1969.
He returned home and started to farm. He was once married and to this union his three children were born. At the age of 34, Lane turned his life over to the Lord. On June 3, 1992, Lane was united in marriage to Jo Ann Flatland in Charlson. They blended their families together and continued farming. He retired from farming in 2013 but continued to wear his bib overalls.
Lane enjoyed hunting and fishing with family and friends. He was an avid football fan, especially the NDSU Bison. He took meticulous care of the trees on his farm and enjoyed traveling. Most of all, Lane cherished the time he spent with his family. He attended Liberty Evangelical Free Church in Williston and was a member of The Gideons International. Lane also served on the board for the Opportunity Foundation in Williston for about 30 years. May God bless the memory of Lane Anderson.
Lane is survived by his loving wife, Jo Ann; son, Gregory Anderson (Andrea); step-son, Daniel Carlson (Lipeng); daughters, Teri Anderson (Brian Wiedke) and Debbie McNeil (Tony); step-daughters, Jolene Haffner (Chad) and Angela Peltz (Bruce); grandchildren, Claire, Benjamin, and Alexis Anderson; Abigail and Joseph McNeil; and Michael Anderson; step-grandchildren, Caleb, Josiah, and Susanna Carlson; Makenzie., Molly, Aaron, Marcus, and Jacob Haffner; Morgan and Hailey Peltz. He was preceded in death by his parents.
Funeral services were held Saturday, Feb. 6, 2021, at 1 p.m. at Liberty Evangelical Free Church in Williston
Visitation was held Friday, Feb. 5, 2021, from 1 to 4 p.m. at Langhans Funeral Home, Parshall and Saturday, one hour prior to the service in the church.
Interment was held Saturday at 3:30 p.m. in the Garden Valley Cemetery, rural Watford City.
Memorials are preferred to The Gideon’s International (www.gideons.org/donate)