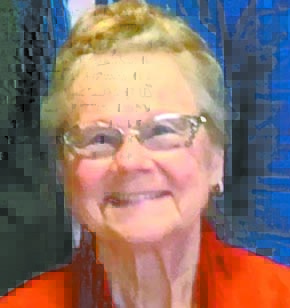 Marsha E. Abelmann, 74, of Alexander, N.D., passed away surrounded by her family on Sunday, Oct. 31, 2021, at her residence in Alexander, N.D. Marsha Abelmann was born to Carl and Mae (Tofte) Hermanson on March 13, 1947, in Williston, N.D. She joined big brother, Ardin and was followed by brother, Tim; sister, Mary; brothers, Conlie, Mark, Ned, and Todd, and last but not least came her baby sister, Tamy. Coming from a large family and being the oldest daughter, she not only spent her days being a kid, when she could, but also became her mother’s helper in caring for a growing brood. As her mother would say “UFF-DA!”
Her early years were spent moving with the family as her father worked on various farms and ranches in western North Dakota and Montana. In her stories of the places they lived, her fondest memories were of the time they lived in Spring Brook, N.D. Mom began her education in Alexander, N.D., hitting several schools in-between and ended her Senior year back in Alexander, N.D., where she graduated. After graduating she worked for a time as a telephone operator and through friends, she met and married Art Salo in 1966. They divorced shortly afterward and to this union a daughter, Garnet, was born.
She then met and married Jerry Bratsberg, where two boys quickly joined the family, Troy (TJ) and about 14 months later Dusty. Mom loved us dearly and has been there for us through the good and the bad. Yes, she made us tow-the-line and take responsibility for our actions, but she could also take on the mother bear protecting her cubs stance if we were unjustly treated.
As her brothers and sisters began to marry, Mom joyfully welcomed her new brothers and sisters-in-law, numerous nieces, nephews, great-nieces and nephews. She was always there to give a helping hand when she could.
After her marriage to Jerry ended, she met and married John Jacobson and her life as a cattle rancher began. She loved the ranching life and her favorite time was during calving season. Though it was labor intensive, she just loved seeing the calves born and then watching them play. This season of Mom’s life took place in the late ’80s and ’90s when a drought hit our area and the stress of keeping the ranch going took its toll on their marriage which ended in divorce.
She did what she had to do trying to make ends meet. She began working at the local café in Alexander as a waitress and cook, not her favorite job…cooking that is.
Several years later she met Timothy Abelmann and began dating. They dated for several years before eloping on Sept. 1, 2006. It was a nice surprise for all of us on Old Settler’s Day.
In 2002, mom lost her baby sister Tamy in an automobile accident. Because they were so close and enjoyed doing many things together, this was very hard on mom. Later, when Tamy’s daughter started her family, Mom became her girls Grandma figure, as they didn’t have any Grandmas and Tim became Uncle Tim. Myiah and Marion called her NANA and they meant a lot to each other. They were very special to Mom and they kept her going.
As far as hobbies, Mom was a seamstress. In fact, she made all our clothes until we started school. I can remember spending hours in fabric stores as Mom searched through patterns and fabric to make just what she wanted for us. She later turned her sewing skills into making quilts and porcelain dolls. She also taught herself how to crochet, making many doilies. Most all her projects were given away in love to family and friends. She spent hours in her yard, growing flowers, trees, and tomatoes.
Though we know you’ve gone home to a better place and have met your Savior face to face, been reunited with the loved ones that have gone before you, we will miss your presence in our lives. We love you and are waiting for the day we will be united again.
Marsha is survived by her husband, Timothy Abelmann; daughter, Garnet Bratsberg; sons, TJ Bratsberg and Dusty (Karolin) Bratsberg; brothers, Ardin (Mary Kay) Hermanson, Tim (Beth) Hermanson, Conlie (Sigrid) Hermanson, Mark (Meg) Hermanson, Ned Hermanson, Todd (Tammy) Hermanson; sister, Mary (Ed) Rettig; sister-in-law, Leola Hermanson; special friend, Kim Byer; two special great-nieces, Myiah and Marion Knetzger; brother-in-law, Dan Abelmann; sisters-in-law, Connie (Jim) Boe-Quandt, Val Abelmann, Keri (Kevin) Hauge; many nieces and nephews;  and many she considered good friends.
Marsha is preceded in death by her father, Carl Hermanson; mother and stepfather, Mae and Lyle Brockmeir; sister, Tamy Rockeman; nephew, Neal Hermanson; in-laws, Forest and Jewel Abelmann; sister-in-law, Leanne Abelmann.
Marsha’s Funeral Service was held on Friday, Nov. 5, 2021, at 11 a.m. at the Trinity Lutheran Church in Alexander, N.D. Pastor Gloria Buxbaum  officiated. Marsha was laid to rest in the Alexander Cemetery in Alexander, N.D. Visitation was held at Fulkerson Stevenson Funeral Home Chapel in Williston, N.D. on Thursday, Nov. 4, 2021, from 9 a.m. to 4 p.m. and an hour prior to the service time at the church. A friends and family service was held on Thursday, Nov. 4, 2021, at 4 p.m. at the Fulkerson Stevenson Funeral Home Chapel in Williston, N.D.
The Funeral Service was broadcast. You can view Marsha’s service directly on her obituary page on our website www.fulkersons.com.