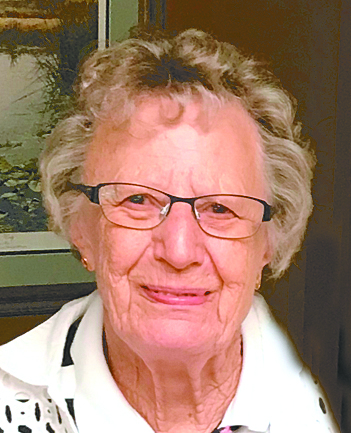 Viola Carolina (Hinderer) Baye passed away surrounded by her family on Monday, April 11, at Edgewood Vista Senior Living in Spearfish, S.D.
Vi was a loving wife, mother, daughter, sister, aunt and friend and will be deeply missed by all who knew her. She was a caring and gentle woman who always thought of others above herself; she was generous of her time and love.
Family was everything to Vi. She was devoted to her children and grandchildren. Despite the miles that separated the family, she loved it when she could get everyone together. Whether it was a vacation walking the beaches searching for seashells along the Pacific Ocean, or feeding the chipmunks off a deck in the Black Hills, Vi was happiest when all were together in one place.
She met Morris “Squill” Baye in Williston, N.D. at a dance. From the time they met, they were constant companions and best friends. Rarely did you see one without the other; working, laughing, but always together. The two recently celebrated their 63rd Wedding Anniversary with family and friends. They had three children, Juana Tingdale (Cliff Parsons), Jim Baye (Diane) and Jack Baye (Lori). In addition to her children, she was a loving and proud grandmother to Kelsey Baye, Ryan Baye, Mitchell Baye and Mandee Baye.
Vi and Morris set up households in North Dakota, Montana, South Dakota and Washington. Vi was a ranch wife, avid gardener, baker and a woman of faith. She was the keeper of the family lefse recipe and no one could make it like she could. When she baked cookies, she would mix up the batch and bake one cookie at a time to test. She would then adjust as needed before finishing the whole batch. She canned everything she grew in her garden along with boxes of fruit and homemade sausage. When Vi and Morris moved back to the Williston area, she worked at Montana-Dakota Utilities Co. before retiring. After they retired, they wintered in Texas after re-connecting with one of Morris’ close Army buddies. They spent many winters there, enjoying the warmth, the sunshine and trips into Mexico.
Vi was raised on a farm near Paradise Flats, N.D. She couldn’t speak English until the first grade. In high school, Vi and two of her sisters moved to Elgin and lived with their Auntie Helen and grandparents since the farm was so far away from the school. After she graduated from high school, she received her teaching certificate and taught for one year before adventuring to business school in Minneapolis. She was about to move to Denver before her younger sister, Arlene, convinced her to detour to Williston as Arlene had met a guy there. Vi then joined her in Williston and evidently met the love of her life.
Vi was preceded in death by her loving husband and companion, Morris; her parents, Mary and Paul Hinderer; an infant brother, David Hinderer; and a dear grandson, Marcus Baye. She is survived by her three children; four grandchildren; and five siblings, Helen (Tony) Gregory, Arlene Tousley, Larry Hinderer, Ernie (Hilda) Hinderer and Brenda (John) Merriman; and numerous nieces and nephews.
Services will be held at the North Dakota Veterans’ Cemetery in Mandan, N.D. on June 3, at 1 p.m. CST.
Memorials can be made toward the North Dakota Veterans Cemetery Foundation, www.ndvcf.org or to Our Savior’s Lutheran Church of Spearfish, S.D.
Arrangements are under the care of Fidler-Isburg Funeral Chapels and Isburg Crematory of Spearfish. Online condolences may be written at www.fidler-isburgfuneralchapels.com