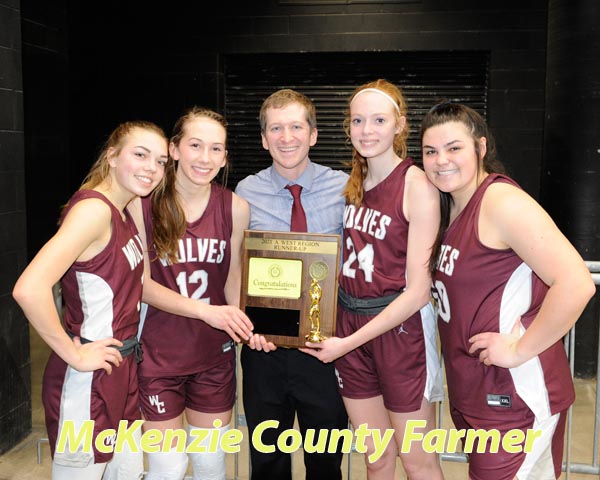 Last year after Watford City suffered a heart-breaking loss in the WDA Tournament play-in game, the members of the Wolves varsity girls basketball team made a vow that next year would be different.
And for then juniors Emma Mogen, Ashley Holen, Hayley Ogle and Riley Faller, they began working on honing their basketball skills and improving their game. Their new goal was not only to make it to the WDA Tournament, but to do something that their team had never done before since moving from Class B to Class A basketball three years ago.
That goal was to make it to the State Class A Tournament.
And on Thursday, the Wolves punched their ticket to the State Class A Tournament for the first time in the school’s history as they pulled out a 65-61 WDA Tournament semifinal win over Mandan.
“It hasn’t really sunk in yet that we’re going to state,” stated Mogen, a 5’8” senior guard, who averaged 7.4 rebounds, 3.6 assists, 3.1 steals and 1.9 blocks per game for the Wolves. “We deserved it after the way that we played all season.”