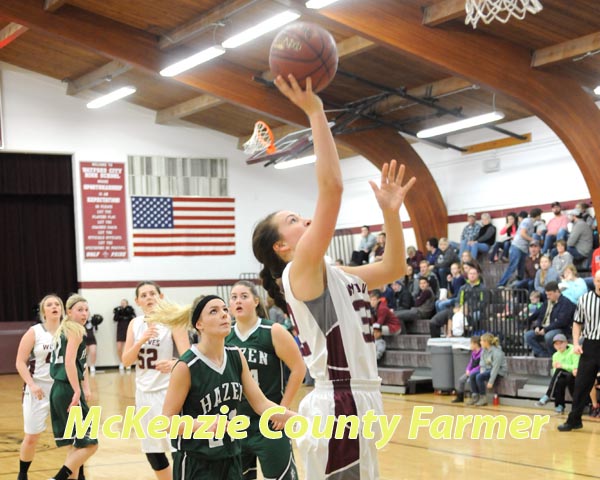 With two big wins over Beach and Hazen last week, the Watford City varsity girls basketball team improved its season record to 7-1. But  the big news for the Wolves came on Saturday evening as Watford City senior, Katie Mogen, broke Billie Dixon’s school scoring record as she netted her 1,713th career point at the end of the first half of the Hazen game. Dixon had set Watford City’s high school career scoring record in 1979 with 1,712 points.
The next action for the Wolves will be on Tuesday, Jan. 19, when Watford City hosts Turtle Mountain.

Watford City 54, Beach 30
The long Christmas break definitely was showing as the Wolves struggled offensively against the Beach Bucs last Friday. But in spite of turnovers and poor shooting, Watford City easily handled Beach with the Wolves posting a 54-30 win.
“At times during the game we did look a little rusty,” stated John Zenz, Wolves’ head coach. “While we got off to a quick, 7-0 start, we struggled to put the ball in the hoop and committed too many turnovers.
Watford City led the Bucs, 12-7, at the end of the first quarter, with Beach battling back to deadlock the game, 16-16, in the second quarter. But a pair of baskets by Krystal Wold at the end of the first half would give the Wolves a 20-16 halftime lead.
“Krystal came in and gave us a spark in the second quarter and she continued her strong play throughout the game,” stated Zenz.
Watford City would outscore Beach, 13-8, in the third quarter to open up a nine-point lead.
The Wolves would finally shake off the rust in the fourth quarter as Watford City would go on a 21-6 scoring run to post the 54-30 win.
“We played much better in the second half on the offensive end,” stated Zenz. “One of the things we have been talking about is being more consistent on the offensive end. We had 29 turnovers against Beach which is just too many to maintain consistency.”
Wold led the Wolves in scoring with 14 points, while Katie Mogen joined her in double figures with 12 points.
Rounding out the scoring for Watford City was  Ricki Lindley with nine points, Mackenzie Sparby with seven points, ReiAnn Lindley and Kaytlyn Grimes with four points each, while Lea Arndt and Lindsay Peterson netted two points each.
For the game, the Wolves shot 57 percent from the field, hitting on 20 of 35 attempts, while making only two of 11 three-point attempts. At the free-throw line, Watford City made eight of 12 attempts for 67 percent.
Watford City    12    20    33    54
Beach                  7    16    24    30

Watford City 65, Hazen 41
It was the Katie Mogen show on Saturday as Watford City picked up its seventh win of the season as the Wolves defeated Hazen, 65-41.
Not only did Mogen pace the Wolves in scoring and rebounding as she has done most of the season, but the 5’9” senior forward also broke the high school’s career scoring record.
Behind a very balanced scoring attack, the Wolves jumped out to a 20-8 first quarter lead against the Bison and never looked back en route to the easy win.
“In only our second home game of the season, it looked like the girls were enjoying playing in front of the home crowd,” stated Zenz.
While Mogen and Ricki Lindley combined to score 16 of Watford City’s 20 points in the first quarter,  the Wolves would spread out the scoring in the second quarter with  eight different girls scoring in the second quarter.
Behind balanced scoring, the Wolves would outscore Hazen, 23-11, in the second quarter to take a 43-19 halftime lead.
Watford City continued to control the tempo of the game in the second half with the Wolves leading the Bison by 25 points, 56-31, at the end of the third quarter.
“We shot the ball well from the field including going five for nine  from the three-point line and hitting on 10 of 13 from the free-throw line,” stated Zenz. “But we committed 23 turnovers, which is a number we need to get down.”
Katie Mogen paced the Wolves in scoring with 16 points, while Ricki Lindley netted 12 points.
Also scoring for Watford City was Mackenzie Sparby with eight points, Avery Sundeen with seven points, Lea Arndt and ReiAnn Lindley with six points, Kaytlyn Grimes and Alli Mogen with four points, while Krystal Wold netted two points.
Watford City    20    43    56    65
Hazen                  8    19    31    41