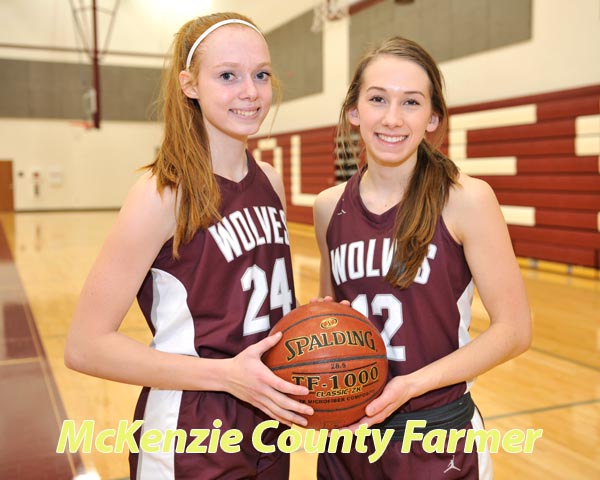 Scoring 1,000 points in a high school career is something that every basketball player dreams of. But very few players ever reach that pinnacle. Likewise, unless an exceptional athlete comes along, most high schools only see a player score that many points on a rare occasion.
But two Watford City High School senior girls basketball players, Emma Mogen and Ashley Holen, have joined that elite group of athletes as Mogen netted her 1,000th career point in the Wolves, 57-46, win over Minot on Dec. 22. Holen would follow shortly as she reached the scoring milestone on Jan. 2, in Watford City’s, 75-62, win over Mandan.
While Mogen, a 5’8” guard, says that she wasn’t aware that she was approaching her1,000th point, Holen, a 5’10” guard/forward, says that she was. But still both players say it was great to score those baskets at home before their parents and fans.
“It was like, oh my goodness,” states Mogen, when the coach called a timeout to recognize her achievement. “It was exciting to score it at home and to have all of the support from my teammates, coach and fans.”
Holen was equally humble about her scoring accomplishment as she says it wouldn’t have been possible with her teammates, coaches and family.
Tom Dwyer, Wolves head coach, gives credit where credit is due citing both Holen’s and Mogen’s hard work at improving their shooting skills.
“As far as scoring goes, Emma has developed into one of the best three-point shooters in the state,” states Dwyer. “Very few girls had a better three-point field goal shooting percentage with the volume of threes that Emma had last year.”