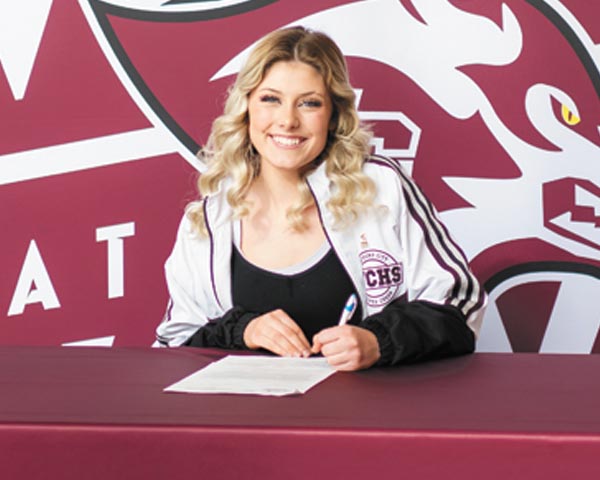 Three Watford City High School (W.C.H.S.) athletes - Grace Bumstead, Maria Halliburton and Conner Quintero - will be taking their athletic talents to the collegiate level as all three of them have signed to cheer with Dickinson State.
The W.C.H.S. cheer program was brought back to the athletic program during the 2016/17 school year. Since then, it has more than doubled in size going from eight members to 30-plus members in the 2021/22 season.
As the team continued to grow, so did its ability to break from just sideline cheering, to becoming a state champion competitive team.
For senior athlete Grace Bumstead, who was placed on the varsity team in 2016 as a seventh grader, winning the championship at the 2021 State Fall Competition was her favorite memory.
“It was just the greatest thing to come back as the school’s first Class A State Champions since they switched us from Class B, especially after everything our team has been through, all the hard work, long practices and dedication we put in for other teams like football and basketball and our own competition,” says Bumstead. “That was our moment and I won’t ever forget how that felt.”