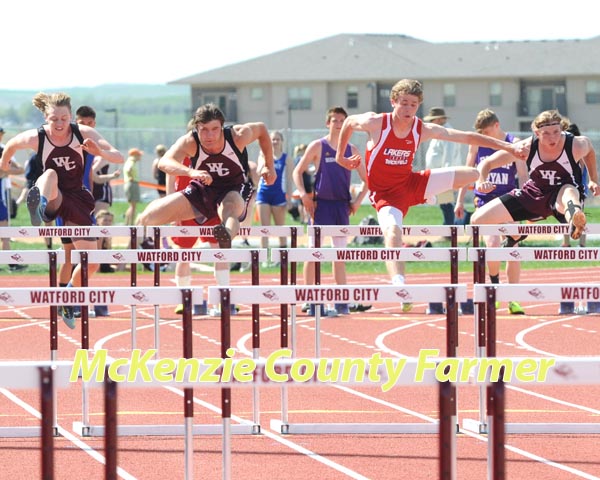 If last Thursday’s performances by Watford City’s varsity track teams is any indication, the Wolves are going to love competing on their new track at the Rough Rider Center as both the boys and girls teams ran away from the competition to win Northwest Conference titles.
The Watford City boys and girls team bested a field of 16 teams to christen their new field before heading to Minot on Saturday to compete in the Glenburn Invitational.
This week the Wolves will be competing in the regional track meet in Minot on Friday, May 19.
Watford City Invitational
“We had a great day for our first track meet in the new facility,” stated Dave Gumke, boys head coach. “The guys performed well in front of the home crowd as we had many new personal records at this meet.”
Connor Dennis improved his state qualifying scores in the 110 and 300 meter hurdles, as did the 1,600 meter relay team of Carter Zenz, Braedon Gumke, Keegan Kaczmar and Connor Dennis for the boys team.
In the girls division, Watford City’s 3,200 meter relay team of Lindsay Peterson, Morgan Rolfsrud, Hayley Ogle and Kayla Ogle qualified for State with a time of 10:11.13.
“We had many personal bests this last week for the season,” stated Greg Brown, girls head coach. “The athletes are coming around and looking like we will be running, jumping, and throwing our best when it counts.”