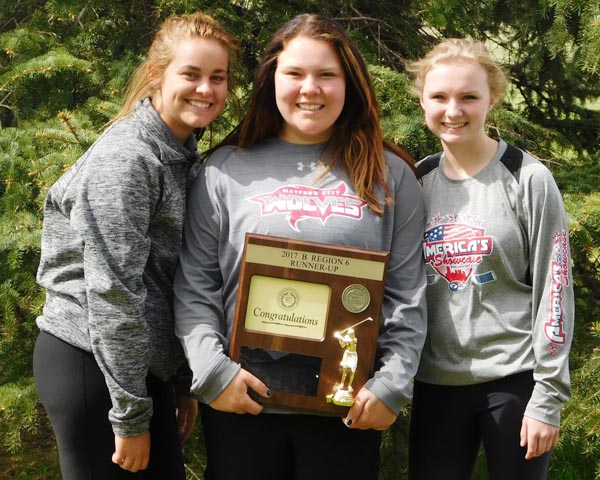 Watford City’s varsity girls golf team needed to score well at the Region 6 Golf Tournament in Crosby last Friday if any other players or the team hoped to qualify for the upcoming State Class B Girls Golf Tournament.
And play well they did. With none of the players previously qualifying for State, it was do or die for the Wolves.
And with a second place finish at the regional tournament, the Wolves punched their ticket to the State Tournament, which will be played on May 30 and 31 at the Tom O’Leary Golf Course in Bismarck.
“We got off to a very hot start with our top four players posting a 214 in the first nine holes of the competition including three scores that were in the top 5 of the tournament for the first round,” stated Wolves’ head coach Mitch Greenwood, who was named the Region 6 Coach of the Year. “We held a 9-shot lead over defending Region Champion New Town after nine holes.”
But the Eagles came alive on the back-nine posting a 198 for the final nine holes to finish the tournament in first place with a team score of 422. The Wolves dropped off their first round pace slightly, shooting a 219 on the back-nine to finish with a team score of 430 to finish in second place in the 10-team field. Stanley finished in third place to also qualify for State.
Abby McCauley, Jayden Uhlich, and Kendra Foreman repeated as All-Region golfers for the second straight season for the Wolves.