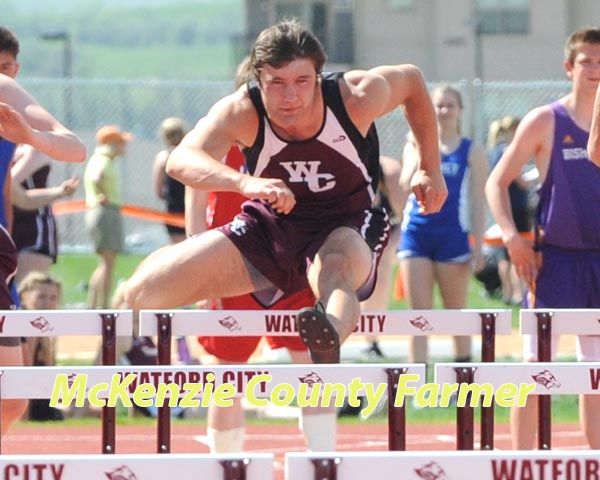 Watford City’s varsity track teams turned in stellar performances at the Northwest Region Track Meet on Saturday in Minot as the Wolves won first in both the boys and girls divisions.
“We had a great day at the region meet,” stated Dave Gumke, boys head coach. “The guys came ready to compete.”
The highlight of the day, according to Gumke, was Connor Dennis winning the 110 meter hurdles to set a new Watford City High School record with a time of 14.90. The previous W.C.H.S. record holder was Dirk Retzlaff with a time of 14.96 set in 1988.
In the boys division, Watford City claimed region championships by Connor Dennis in the 300 meter hurdles, Braedon Gumke in the pole vault, and the 1,600 meter relay team of Carter Zenz, Braedon Gumke, Keegan Kaczmar, and Connor Dennis.
“At region, we added Rait Elliot in the 300 meter hurdles, Devin Schmitz in the pole vault, Jackson Faller in the shot put, and the 3,200 meter relay team of Braedon Gumke, Mark Pingel, Devin Schmitz, and Keegan Kaczmar to our state qualifiers,” stated Gumke.
Not to be outdone by their male counterparts, Watford City’s girls track team claimed five regional championships with Kayla Ogle claiming firsts in the 800 and 1,600 meter runs. Also placing in first for the Wolves was Sidney Sanford in the 300 meter hurdles, Tia McGorman in the high jump and Mikka Haugeberg in the pole vault.