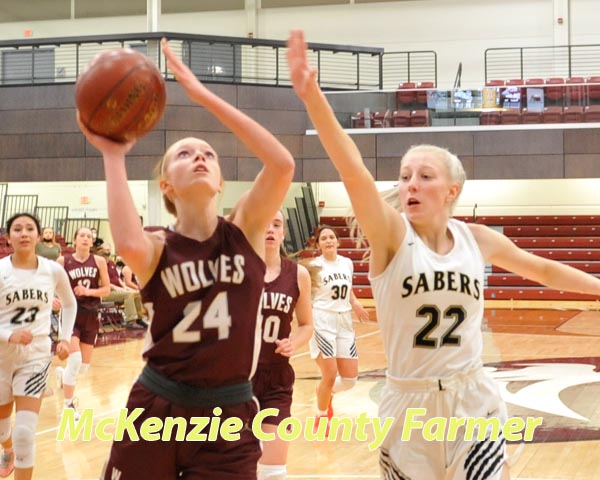 With two solid wins over Bismarck Legacy and Mandan this past week, the Watford City varsity girls basketball team moved up to the No. 2 spot in WDA standings, while moving up to the No. 4 spot in the latest North Dakota Class A Power Poll.
The Wolves, who are 5-1 in WDA action, edged Legacy, 56-52, on Tuesday, Dec. 29, and then downed Mandan, 74-62, on Saturday, Jan. 2.
The Wolves next action will be on Friday, Jan. 8, when they travel to Belcourt to take on Turtle Mountain.
Watford City 56, Legacy 52
In a battle between two of the top teams in the WDA, Bismarck Legacy’s press gave the Wolves fits during the first half before Watford City was able to make the necessary adjustments during halftime.
The Sabres controlled the tempo throughout the first half as Bismarck would lead the Wolves by nine points, 31-22, at the buzzer.
But in a tale of two different halves, the Sabres saw a completely different Watford City team in the second half as the Wolves started hitting their shots and regained their composure.