Downpour dumps up to 8” of rain across county 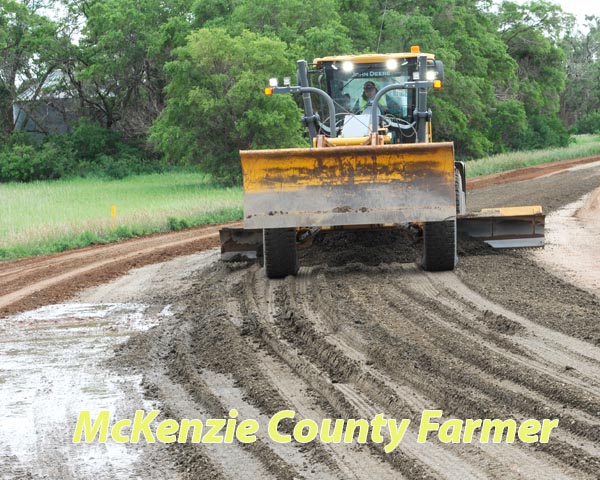 The torrential downpour that dumped up to eight inches of rain across McKenzie County in a 24-hour period from the evening of Monday, July 8, to the following night had area farmers and ranchers smiling.
“It was a million dollar rain,” stated Milo Wisness, as he watched an ocean of water flowing down Watford City’s Main Street on Monday afternoon as he was buying parts at NAPA Auto Parts. “The rain couldn’t have come at a better time for our crops. It was too late for our hay crop though.”
Wisness, who farms in the Keene and Arnegard areas of the county, was among the other county farmers and ranchers who were hoping for a good summer rain to give their crops and pastures a much needed boost.
But last week’s downpour, which shattered the county’s former 24-hour record rainfall of 2.83 inches set on July 1, 1997, didn’t bring any smiles to the faces of the state’s oilfield companies that rely on the county’s road system to haul oil and water to and from well locations.
“We restricted 1,800 miles of the county’s unpaved, gravel roads to 12,000 lbs. GVW at 9 a.m. on Monday,” stated Tommy Glover, McKenzie County Road and Bridge superintendent. “We made the right call at the right time to close the roads to prevent extensive damage due to the heavy oilfield traffic.”