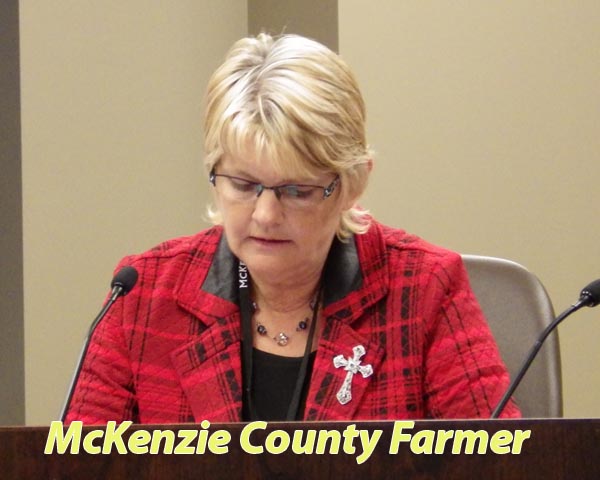 In an unplanned agenda item, McKenzie County Commissioner Kathy Skarda motioned to reconsider petitioning the governor for Sheriff Gary Schwartzenberger’s removal and disciplining Lt. Michael Schmitz.
Her fellow commissioners Ronald Anderson, Vawnita Best, Richard Cayko and Douglas Nordby met with silence her motion and an accompanying request to tape all future meetings at their meeting Tuesday, Nov. 1.
Skarda said of 317 people who have contacted her regarding the board’s Oct. 13 motions, only nine supported those actions.
“Yes, I am ethically responsible to ask questions and vote the way that I think is best,” she said, “but I am troubled by the lack of specific facts, in my opinion, pertaining to Lt. Schmitz.”
Commissioners motioned to place Schmitz on unpaid administrative leave as of Oct. 16, but Schwartzenberger has refused to do so, citing commissioners’ “unlawful interference with his office.”
“There is a lot of ‘he said, she said’ complaints,” Skarda said, adding the testimony against Schmitz is “kind of like a fifth-grade recess fight with a lot of mudslinging between coworkers, someone said this and poking fingers at that.”
Skarda also addressed bullying among commissioners, like Chairman Richard Cayko telling her, “We always do it this way so we should vote this way.”