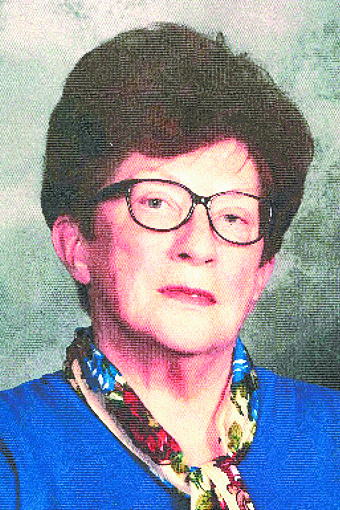 Audrey Joan (Kouba) Auen was born in rural Hettinger County on Sept. 20, 1939.
Audrey attended rural school until the 8th grade. She then attended St. Mary’s of New England before transferring to Regent High School during her junior year where she graduated in 1956.
Audrey then moved to Helena, Mont. and worked for an insurance company. She moved back home until 1959 and then moved to Monrovia, Calif., where she was a secretary at Intercontinental Engineering. She returned to North Dakota in 1961.
She married in 1962 and to this union were born Lorie, Randie, and Vicki. They lived in various places before settling in Watford City in 1977.
Audrey was employed by the McKenzie County Sheriff Department as a dispatcher and correctional officer. In 1980, she worked as the bookkeeper at Farmers Elevator in Watford City. She was then offered and accepted a job as the office deputy for the Sheriff’s Department until her retirement in 2001. She then made her final move to Binford, N.D., where her daughter and family live.
While in Binford, she worked for the city, park, and was site manager for South Central Adult Services. She was a member of city council and also served on the park board. She really enjoyed her yard and flowers.
She is survived by her three children, Lorie (Ken) Gilbertson of Binford, N.D., Randie (Toni) Auen, Watford City, N.D., Vicki (Bryan) Hillestad, Reseda, Calif.; four grandchildren, Chaunci (Milo) Mell,  Shelbi (Josh) Almgren, Emmy Gilbertson, and Sophia Hillestad; and four great-grandchildren, Oliver and Flynn Mell, and Eden and Millie Almgren.
She was proceeded in death by her parents; grandparents; sister, Sue Mayfield; aunts and uncles, especially Larry and Denny.