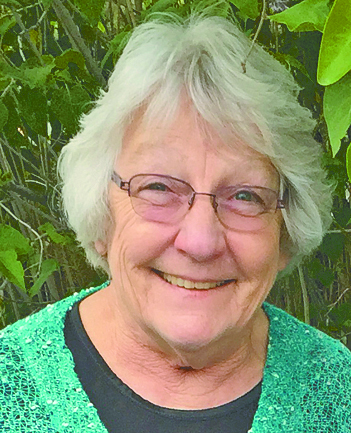 Barbara Ann Weber Bauman was born Dec. 24, 1940, Barb was the second of four children of German immigrants Elizabeth Langwald Weber and Joseph Weber. During her childhood she loved working with her father on the family farm south of Fairview, Mont.
Barb was the homecoming and prom queen her senior year at Fairview High, but was quick to say “there weren’t many girls in my class.” Her classmates knew her to be kind and beautiful, especially her high school sweetheart Johnny Bauman whom she later married.
After high school Barb moved to Williston, N.D., and worked as a secretary for the Job Service until becoming engaged to John two years later. John’s parents weren’t too keen on their son marrying a Catholic, so John quit farming and moved to Billings where he got a job and found an apartment for Barb to live until they were married - which happened on Dec. 3, 1960, in Billings.
A change of heart by John’s parents and a subsequent heart attack of his father, brought the newly married couple back to Fairview to work at the Bauman family farm in East Fairview, N.D. Barb worked on the farm running the business side of things, driving the beet truck, and keeping everyone fed while also working for the Soil Conservation Service in Fairview. Barbara was never a stranger to hard work.
Once the children came, her work at the Soil Conservation Service ended. Barb and John raised three girls on the family farm, Diane, Chris, and Jeanne whom they taught independence and a strong work ethic.
Then in 1982, with the girls mostly raised, Barb was asked to join a newly-formed company that ignited a passion she didn’t know she had - computers! On Line Computer Service hired her to do bookwork for businesses in Fairview and Sidney. She learned the ins and outs of computing at the dawn of the computer age. She said it was a very exciting time!
In her final years of life, as her health declined, she was always tickled to see the surprised and impressed looks on her medical providers’ faces when this white haired 80-year-old lady was fluent in their medical web portals.
Barb was a voracious reader, never without a book and later her Kindle, and loved playing games of any kind. She was particularly a wiz at computer games. A favorite memory her youngest daughter has with her mom is the Christmas that an Atari machine was under the tree. Barb played it as much as Jeanne did, and they together played Pac-Man until the score hit the highest it could go and reset back to zero. Then later Barb played with her grandsons Adam and Drew…upgrading from Atari to Nintendo. Barb’s oldest grandson Adam bragged to his friends that his Granny conquered Super Mario Brothers and the Legend of Zelda before he did. Her other grandson Drew, added that she was a cool a** Granny - he called her the O.G. “Original Granny!”
After her work at On Line Computer Service concluded in the early 1990s at the age of 50, Barb started a new career working in the McKenzie County Tax Assessors Office in Watford City, N.D. A few years later she was promoted and served as the County Tax Director for 12 years. When no one else volunteered, Barb took on the McKenzie County mapping project that was necessary for implementing the 911 Emergency Service in the county. She enjoyed and found satisfaction in her work for McKenzie County and was well respected by her colleagues whom she considered friends.
Barb’s community service included the Yellowstone Township Board, Sioux-Yellowstone Fire District Board, McKenzie County Social Services Board, a Volunteer Income Tax Assistance tax preparer, and St. Catherine’s Catholic Church Finance Council. She loved her Catholic faith and the St. Catherine Parish community.
Barbara passed away peacefully on Saturday morning, Oct. 1, 2022, from therapy-related myelodysplastic syndrome, a complication resulting from cancer treatments she received two years earlier. Barb was a resident of Fairview, Mont., and East Fairview, N.D., for nearly all her life.
She is survived by her daughters, Diane Shannon (Gene Wildman), Christine Harris (Paul), and Jeanne Saarinen; grandchildren, Adam (Tiffanee) Zelka, with great-granddaughters, Maddie, Callie, Chloe and Macey, Drew Zelka (Marissa Pederson) and Samantha (Joe) Darnell. Also surviving are Barb’s three siblings, Betty Wright, Margie (Chris) Pappas, and Mike (Rosemary) Weber.
Preceding Barb in death are her parents; her husband, John Bauman; nephew, Marcus Weber; brother-in-law, Clay Wright; and son-in-law, Todd Saarinen. Barb loved her family very much.
A Funeral Mass will be celebrated for Barbara at St. Catherine’s Catholic Church in Fairview on Thursday, Oct. 6, 2022, at 10 a.m., with Father Jim O’Neil officiating. Burial will follow at the Fairview Cemetery.