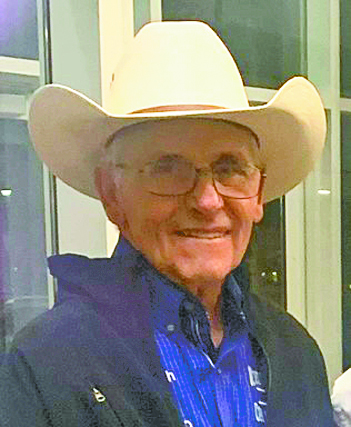 Darrel Quale, 85, of New Town, died peacefully on Thursday, Dec. 15, 2022, at a Minot hospital.
Darrel Ray Quale was born Sept. 21, 1937, in Watford City, to Harold and Ruby (Dunn) Quale. He was raised on the family farm near Charlson, and attended area schools, graduating from Watford City in 1955. After graduation, he drove for Lawrence Brothers Trucking out of Watford City.
He enlisted in the U.S. Army, serving in Japan and later at the 38th Parallel in Korea in the Canine Corps. He was very proud of the time he spent serving his country. After his honorable discharge, Darrel met Joanne Goodall at the Legion Club in New Town. They were married on April 23, 1962, and made their home in Keene.
Darrel began his work in the oilfield with Signal Oil & Gas and ended his career with Amerada Hess, retiring in 1997 as the director of the Charlson field. He was respected and loved by all those who worked with him.
In the 1970s he and Joanne began farming and ranching on the Goodall Ranch and later bought the ranch from her parents. He also took over his father’s farming operation in the ’60s. Darrel was involved in farming and ranching his entire life.
Darrel had a passion for horses; he was a horseman through and through. A cowboy at heart, he enjoyed the rodeo and in his younger years, he competed in saddle bronc riding and competed against several who went on to be world champions.
He was never one to be sitting on a horse and wishing he was somewhere else. Bitter cold, freezing rain, or howling wind. It was all part of the life he loved and there was no place he would rather be.
A favorite time for Darrel was the annual fall Sand Creek Roundup. They would unload horses at daybreak and spend the day clearing the bottoms and coulees. Darrel could always be counted on to make sure every last critter was accounted for. He always looked forward to helping his friends and neighbors work cattle.
No matter where Darrel went, his sidekicks (the dogs) were always by his side. The foursome of Darrel, Rev, Roxie, and Chester were a common site on his trips to town. Darrel had a quiet sense of humor that was best experienced by taking a ride in the pickup with him and his sidekicks.
When at home in the evenings, his animals were always by his side, his dogs beside him, and one of the many cats in his lap, all competing for the love in his hands. His love for all creatures great and small was one of his many wonderful traits.
Darrell was also very proud of his Norwegian heritage. He took his parents to the Norsk Hostfest in Minot every fall.
His family and his animals always came first. He never tried to be someone other than who he was. He always had kind words to say and a helping hand to offer. He was a man of few words, but it was worth listening, when he spoke.
He was a member of Beck Sherven American Legion Post 290 of New Town, the North Dakota Stockmen’s Association, and a lifetime member of the Farm Bureau. He also served on the Riverview Township board. Joanne and Darrel both served on the New Town Ambulance for many years. Darrel, Joanne, and Doctor Wilson were the go-to emergency service for many years.
Darrel is survived by his wife of 60 years, Joanne Quale; sons, Chuck Quale (TaCele) and Scott Quale (Deanne) both of New Town; grandchildren, Sheldon Quale, Crystal Wright (Luke), Bryce Herden (Kalyn), Michelle Kokkeler (Darren); Riley Johnson (Sophie) and Jack Johnson; great-grandchildren, Casey Pinkerton, Hannah Hadley, Tassyn and Cadyn Wright; Austin and Rilee Lewis; Morgan, Saige, and Dylan Kokkeler; and Elisabeth Johnson; sister, Darlene Stultz (Kenneth) of Grand Forks; brother-in-law, Steven Goodall (Patti) of Dickinson; sister-in-law, Anne Stout (Glen) of Las Vegas, Nev.; many nieces and nephews.
He was preceded in death by his parents; parents-in-law, Francis and Alice Goodall; sisters-in-law, Jean Murray and Mary Lou Goodall; and brother-in-law, Robert Goodall.
His funeral was held Tuesday, Dec. 27, 2022, at 11 a.m. at the Keene Dome in Keene, N.D.
Visitation was held one hour prior to the start of the service at the Keene Dome.
Interment was at the Good Hope Cemetery in rural Keene, N.D.
Langhans Funeral Home, Parshall www.langhansfuneralhome.com