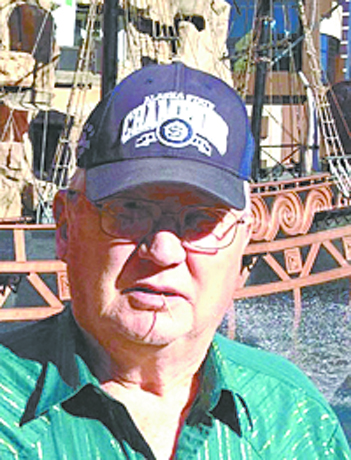 On Friday, Dec. 3, 2021, Floyde Syverson joined his Lord and Savior Jesus Christ after a stay at McKenzie County Health.
Floyde Elton Syverson was born on Nov. 10, 1935, to Clarence and Nora (Gunderson) Syverson. Their home was outside Tioga, N.D.
In the spring of 1940, their family moved to a small farm 8 miles southwest of Watford City. Floyde attended Pleasant Hill School through the 8th grade. His family moved to the current homestead in 1947. Floyde continued to reside there until his death. He attended Watford City High School and graduated in 1953. He played basketball and football during his high school years.
After high school he worked in the oilfield until 1978 while he continued to farm and ranch. He continued ranching until 1987, but farmed unto his 70s.
On Nov. 6, 1958, he married his sweetheart Luella Ellen Pierce from Alexander, N.D. His son Todd was born in July 1959 and four years later they welcomed his daughter Tracy in January 1963.
Floyde enjoyed watching his children participate in their sports and was a strong supporter of the Watford City Wolves and DSU Blue Hawks. In his spare time he enjoyed fishing and hunting and he was always on the lookout for arrowheads. Last year at the age of 85, he shot a mule deer buck while out hunting by himself north of Arnegard.
Floyde was a proud member of the Eagles where he enjoyed playing pinochle with a special group of friends. He went to breakfast every day at the Little Missouri Grille where he liked visiting with the locals and teasing the staff. He delighted in talking about his days in the oilfield and his love of farming.
Floyde always had a special place in his heart for children and especially for his grandchildren and great-grandchildren. They always brought a smile to his face and he enjoyed watching them grow and participate in sports. He often traveled to Alaska to spend time with them.
He is survived by his children, Todd (Lana) Syverson and Tracy (Mark) Christensen; grandchildren, Jenna, Chet (Kelley), and Tate (Kaiti) Syverson; great-grandchildren, Henry, Brady, Chloe, and Treyden; sisters, Carol Gunter and Dixie (Jim) Lang; several nieces and nephews; and special friend, JoAnn Faulkner.
Floyde was preceded in death by his father, Clarence; mother, Nora; wife, Luella; brother, Lyle; and sister, Donna Johnson.
The family would like to express their deepest thank you to all of the staff at McKenzie County Healthcare for their kind and loving care of their father. A special thank you to Dr. Gary Ramage for his many years of care.
Private funeral services were held for Floyde E. Syverson, 86, of Watford City. In lieu of flowers memorials may be given to the Watford City Eagles Aerie #3543 Youth Scholarship Fund, Attn: Bill Rafferty, P.O. Box 784, Watford City, ND 58854. Remembrances, condolences and pictures may be shared with the family at www.fulkersons.com.
Fulkerson-Stevenson Funeral Home of Watford City is caring for the family.