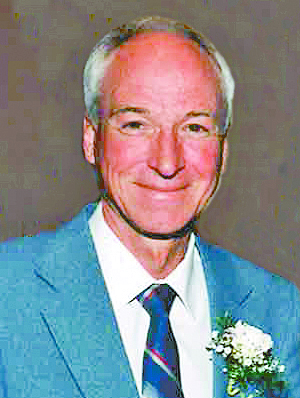 John David Suter, Bismarck, N.D., died on Dec. 16, 2021, at Sakakawea Medical Center in Hazen, N.D., surrounded by his loving family.
John was born on Jan. 15, 1940, in Lisbon, N.D., to Art and Shirley (Nelson) Suter. He attended St. Aloysius Elementary School before entering Lisbon High School where he graduated in 1958. John enlisted in the United States Army and served for two years. John married his wife of 59 years, Lolly Lyons, on Sept. 24, 1962. To this union were born two sons, Bill and Bob. John attended Ellendale Teacher’s College where he played football and graduated with a teaching degree. In 1965, John, Lolly and their two young sons moved to Hulett, Wyo., for his first teaching job, where he taught social studies and coached the varsity football, wrestling and track teams. In 1969, they moved the family to Killdeer, N.D., where John continued his teaching and coaching career. He also drove bus and officiated basketball games for many years. After a 30-year teaching career, John retired in 1995, but continued to substitute teach for many years. John also worked as a park ranger in the summers at Theodore Roosevelt National Park, a job he was extremely proud of. John had many interesting stories about his park ranger days. He also had love and compassion for nature and wildlife and enjoyed seeing the animals at the park every day. John and Lolly were members of St. Joseph’s Catholic Church in Killdeer where he was a lector and Eucharistic Minister for years. In 2012, John and Lolly moved to Bismarck, N.D.
John enjoyed history and talking current events, he was a Minnesota Twins, DSU Bluehawks and NDSU Bison fan, and a devout fan of the Minnesota Vikings (still waiting for that first Super Bowl win). He also looked forward to his trips to Denver to attend high school, college and professional ball games. John did daily crossword puzzles and was known by those who loved him for his witty sense of humor. He had four grandchildren, all of whom he made a great impact on; he was a wonderful and active grandfather, spending time with the kids regularly and attending their activities and sporting events.
John is survived by his wife of 59 years, Lolly; his sons, Bill (Belinda) of Beulah, N.D., and Bob (Julie), Aurora, Colo.; grandchildren, Logan (Cassie), Carissa (Kenny Liebel), Molly, and John William; four great-grandchildren, Layla and Stella Suter, and Harper and Jack Liebel; sisters, Joyce Schlader and June Hiam, both of Lisbon, N.D.; and numerous nephews and nieces. He was preceded in death by his parents, Art and Shirley Suter.
John and his family would like to extend their extreme gratitude to the staff at Sakakawea Medical Center in Hazen for their care and kindness while treating John over his last days.
A Mass of Christian Burial was held at 2:30 p.m. Wednesday, Dec. 22, at St. Aloysius Catholic Church in Lisbon, N.D. Visitation was held Tuesday evening starting at 5 p.m. and Rosary at 5:30 p.m. with prayer service and sharing following. John’s funeral mass was live-streamed on the Dahlstrom Funeral Home website www.dahlstromfuneralhome.com
In lieu of flowers, the family requests donations to either The Salvation Army or the Sakakawea Medical Center Foundation.