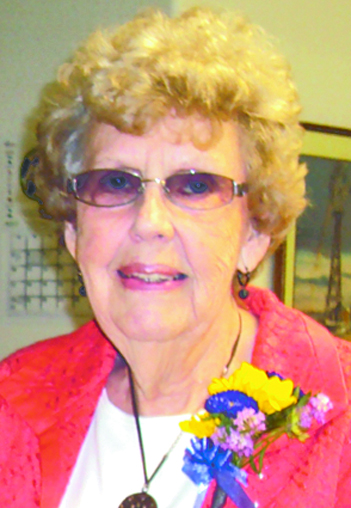 Hazel Jean (Hoeck) Pilot, 95, Fargo, formerly of Beach, Watford City, and Bismarck, died on Aug. 31, 2021. A celebration of life and burial will take place in the summer. Burial will take place at the North Dakota Veterans Cemetery in Mandan.
Hazel was born in Beach in 1926, the second child of Ted and Lillian Hoeck. She grew up on the Hoeck Farm north of Beach with her 10 siblings who all referred to her as “Sis.”
She attended grade school at the Lapla Country School north of Beach and graduated from Beach High School in the Class of 1944. After attending Dickinson State College and receiving a Standard Teaching Certificate, Hazel taught rural schools near Sentinel Butte (Bonnie View) and the Jordan School in Wibaux County. Hazel also taught Kindergarten for several years in Beach before moving to Watford City where she taught in Arnegard until the school closed. Hazel went on to work at Lundin Drug Store, later becoming Barrett Pharmacy, on Main Street in Watford City. She enjoyed her interactions with the local folks for the many years she worked at the pharmacy.
She married John Pilot on Aug. 16, 1946, in Wibaux, Mont. They had two daughters, Debra Jean Fuller, Bluffton, S.C., and LaRaye Jo Anderson, Moorhead, Minn.
Hazel was active in Homemakers, Women’s Club, the Legion Auxiliary, First Lutheran Church, and her Circle. She held many leadership positions and volunteered much of her time. She spent many years working at the McKenzie County Fair checking in exhibits and judging. After retiring, she and John both delivered Meals on Wheels for several years. Hazel continued to deliver meals after John passed as she enjoyed seeing the clients and bringing them a hot meal and a smile. She enjoyed playing cards, dancing, and attending local events. Hazel was fun-loving and always had a smile or a sassy comment for anyone she met. She maintained a positive outlook and an upbeat attitude, which she attributes to her longevity.
Hazel had Macular Degeneration which began robbing her of her vision, and after she could no longer drive, she moved to Edgewood Assisted Living in Bismarck where she spent 10 years. Not long after moving in, she met a special friend, Don Larson, and they enjoyed each other’s company for many years. In 2021, Hazel moved to Edgewood’s Glenn’s Place in Fargo.
She is survived by her daughters, Debra Fuller and her husband Kent, and LaRaye (Jo-Jo) Anderson. She has five grandchildren, Megan (Brandon) Fuller Davis, Heidi (Michael) Fuller Crouch, Erik (Elise) Anderson, Peter Anderson and Stephanie (Kevin) Anderson Sanford. Hazel’s 11 great-grandchildren included, Marley and Jack Davis, Eli and Lily Crouch, Thomas, Nora, Rosie, Samuel, Katherine, and Michael Anderson, and Sonny Sanford. She is also survived by siblings, Dorothy (Larry) Goodall, Judy (Maurice) Hall and Bob (Toni) Hoeck; and her sister-in-law, Wanda (Larson) Hoeck.
Hazel was preceded in death by her husband, John O. Pilot; her parents, Theodore and Lillian Hoeck; siblings, Helen Hoeck, Margaret Ann Hoeck, Bud Hoeck, Pat Hardy and husband Dick, Bill and wife Helen Hoeck, Colleen and husband Tommy Gibbon, Rita and husband Herb Prior; nephew, Dan Hardy; and niece, Christine (Prior) Dunn.
To share memories of Hazel and to sign the online guestbook, go to www.eastgatefuneral.com.