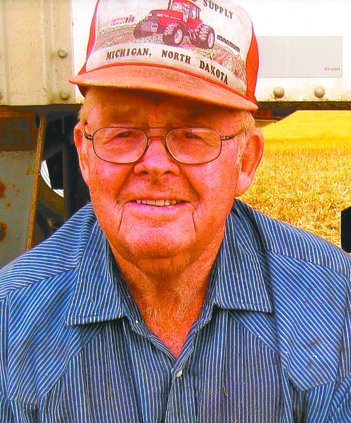 Wayne E. Reep, 89, Bismarck, N.D., and formerly of Michigan, N.D., went to be with the Lord peacefully on Aug. 30, 2021, at Edgewood Village in Bismarck with the love of his life, Marilyn, beside him.
Wayne was born Oct. 29, 1931, to Syver and Clara Reep at the home of his grandparents, Clarence and Annie Paulson, in Michigan, N.D. He was the oldest of six siblings and his dad, Syver perished in the blizzard of 1941 when Wayne was 9 years old. His mother later remarried and he gained two step-brothers, with another sibling coming later. Wayne attended grade school and graduated from high school in Michigan, N.D. In 1951, he enlisted in the Army as a paratrooper. He received his jump school diploma in June, 1951, and later served as a supply sergeant at Fort Bragg, Fort Campbell, and Dugway. During one of his furloughs Wayne started dating Marilyn Hendrickson. They were engaged in 1952 and married on June 11, 1953, during another one of his furloughs. Their union would result in three children, Patty in 1955, Peggy in 1957, and Dennis in 1962.
After discharge from the army, Wayne worked for area farmers, Sweetheart Bakery, and the Michigan Elevator. In 1961, he and Marilyn purchased the family farm from his step-father. They farmed until retiring from farming in 1996, at which time they moved to Bismarck to be closer to their grandchildren. They purchased a home in Bismarck with a large garage, which Wayne quickly adapted to a woodshop where he made furniture, wood boxes, and replicas of the family farm home and barn. He also spent the next 20 years helping with his son-in-law’s farming operation near Alexander and Arnegard, N.D., as a “hired hand,” advisor, counselor, and most importantly, Grandpa.
Wayne was a hardworking farmer and brought that work ethic to any endeavor. His sense of humor was always present and he enjoyed sharing many laughs with family and friends. He was an avid supporter of all of his children’s and grandchildren’s sporting and musical activities and enjoyed all of their accomplishments. He and Marilyn were able to spend the last 4½ years at Edgewood Village in Bismarck. They were married for 68 years and were honored as the longest married couple at many of the wedding dances they attended for their grandkids and others. They were so very proud of their children, their many accomplishments, their marriages, and the grandchildren and great-grandchildren that provided them so much joy in their later years.
Wayne is survived by his wife of 68 years, Marilyn Reep; sister, Marian Hendrickson-McVille, half-brother, John Kallestad; sister-in-law, Betty Kroke, Michigan; sister and brother-in-law, Eleanor and Bob Benson, Plano, Texas; children, Patty (Mike) Dwyer, Bismarck, Peggy (Bill) Larkin, Jonesborough, Tenn., and Dennis (Melissa) Reep, Bismarck; along with many nieces and nephews. He is also survived by eight grandchildren, Andy Dwyer, Jack (Rachel) Dwyer, Rachel (Corey) Meuchel, Danny (Britney) Dwyer, Tommy (Olivia) Dwyer, Joey (Molly) Dwyer, Megan (Izec) Neer, and Matthew Reep; along with 11 great-grandchildren, Clara, Oliver, Jesse, Dahlia, Mikey, Sophie, Kasen, Finn, Grady, Lavin, and Rhep.
He was preceded in death by his parents, Syver and Clara; his step-father, John C. Kallestad; brothers, Richard, James, Eugene; and sister, Sylvia Brichnac (Susie); step-brothers, Lyle Kallestad and Manvel (Mannie) Kallestad; sister-in-law, Donna Kallestad; and brothers-in-law, Vernon Hendrickson, Forest Kroke, and Jim Brichnac.
Services were held at 10:30 a.m. CDT on Friday, Sept. 3, 2021, at Michigan Lutheran Church, Michigan, N.D. Burial with military honors followed at Michigan Cemetery. A family service and visitation was held from 6:30 to 8:30 p.m. on Thursday, Sept. 2, 2021, at Aaker Funeral Home, 116 C Avenue West, Lakota, N.D.
In lieu of flowers, the family suggest memorials to Michigan Lutheran Church or Shiloh Christian School of Bismarck where all of his grandchildren graduated.