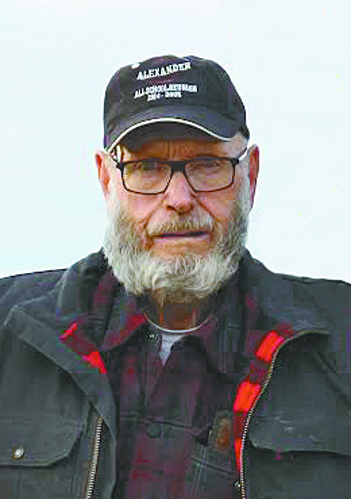 James Fixen, 83, of Alexander, N.D., passed away peacefully on Thursday, Aug. 26, 2021, at his residence in Alexander, N.D. Fulkerson Stevenson Funeral Home of Williston is assisting the family.
James Leonard Fixen was born on Nov. 16, 1937, to Leonard and Elda (Abelmann) Fixen in Williston, N.D. James grew up on the river bottoms near Williston, N.D., and later graduated from Alexander High School in 1956. He was an active member in all sports while attending Alexander Public School.
James was united in marriage to Rae (Hudson) Nov. 30, 1960. To this union 3 sons were born, Doug, Kurt and Kent. James and Rae celebrated 50 plus years of marriage.
Throughout his life James worked as a farmhand, bricklayer, and meat cutter. He owned a grocery store with Rae and moved his family to Alexander in 1975. The grocery store better known as Alex Market was run from 1975-1987 when the doors had to close. Jim finished his career by working for the city. He took great pride in the water system and even greater pride in making sure the Alexander Park looked spectacular all summer for Saturday night burgers in the park and especially Old Settlers’. James continued to do some part-time work for the city until his passing.
James enjoyed watching his kids, grandkids and great-nieces and nephews at sporting events. James had a passion for horses and buggies; he enjoyed taking people for rides around the park. He loved hunting, fishing and camping in his younger years. James enjoyed all of the time spent at the farm with George and Larry Novak. In recent years he was into wood-working and making walking sticks and canes out of diamond willow branches. James mastered the art of making donuts and pickled eggs for family and friends. Anyone that needed a knife sharpened knew to come to him. He loved pulling out the steel and making that knife sharp. His watermelon sales started with James and LeRoy traveling to South Dakota for a trailer full of watermelons and muskmelons to bring back and sell. This continued for several years up until a couple of years ago when he traveled with his grandson Cory. James and friend Jerry Bratsberg loved to attend the many auctions around the countryside, never to come home empty-handed.
James was a member of the Alexander Fire Department for many years and the Alexander Lions Club for a short time. He was a City Council Member and drove a school bus for the Alexander Public School for many years.
James is survived by his two sons, Kurt (Barbara) and Kent (Carrie); grandchildren, Jami (Randy) Murie, Joshua, Tyler (Kristin), Kelcey (Christopher) Hart, Cory, and Janaya; great-grandchildren, McKenzie Suko, Kailee and Kennedy Murie; sister, Darlene (Merrill) Benth; sisters-in-law, Clara Fixen, Faye Snyder and Geri Hudson; brother-in-law, Cecil Falcon; and numerous nieces and nephews.
James was preceded in death by his wife, Rae; son, Doug; parents, Leonard and Elda; father and mother-in-law, Willard and Thelma Hudson; brothers and sisters, Harley (Elsie), LeRoy, Ellen (George) Novak, Edna (Ervin) Rehak, Delores Hagen and Wayne Hagen.
Jim’s memorial service was held at 2 p.m., Tuesday, Aug. 31, 2021, at the Trinity Lutheran Church in Alexander, N.D. Pastor Kevin Beard officiated. Inurnment was at the Alexander Cemetery in Alexander, N.D. Visitation was held an hour at the church prior to the service.