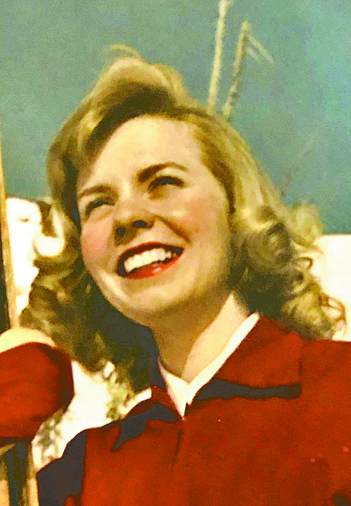 On Saturday, Aug. 27, 2022, we lost a generous loving mother, a wife and a teacher. Joanne Elizabeth (Wold) Manchester passed away quietly surrounded by her family and friends and the caring staff of Missoula Health and Rehabilitation Center, Big Sky Palliative and Hospice. Her passion and spirit for life will be missed by all who knew her.
Joanne was born on Dec. 6, 1929, to Luella (Gunderson) Wold and Paul Oscar Wold in Alexander, N.D. During labor, there was a bit of a conflict between a basketball game and Joanne’s delivery time. Her delivery was sped up with forceps so the doctor could get to see his game. The doctor’s love of basketball rubbed off on Joanne. She played basketball in high school and later in life enjoyed following the Lady Griz and other NCAA basketball.
Joanne was raised in Alexander, N.D., and grew up with both sets of grandparents nearby and her older brother, Paul Donald Jr. As the younger sister, she would try to keep up with him and her dad whether on fishing trips or duck hunting trips. Life was different during those times. There was no TV, no cell phones, no Wi-Fi and in some cases no running water. She enjoyed growing up in this small-town environment, where everyone knew everyone. Picnics on Ragged Butte and swimming at a local water hole were highlights of her summer days. Her strong Lutheran Christian ties and belief in God came from her family. Grandparents Otto and Anne Wold were charter members of the Trinity Lutheran Church in Alexander. She regularly went to church, Sunday School and Luther League at Trinity Lutheran.
Joanne excelled in school and graduated valedictorian of her class. In high school, Joanne sang in choir at church and school functions and played the piano. She played guard in her high school basketball team where her team twice competed in the state tournament. She learned to ski in North Dakota and even tried ski jumping like a true Norwegian.
She attended Concordia College in Morehead, Minn., for two years and continued at Minot Teachers College. A friend urged Joanne to apply for a teaching job in Missoula. As luck would have it, she was hired and taught fourth grade at Hawthorne School in 1950, at the age of 20 and took correspondence courses to finish her degree. Through a mutual friend, she met Bob Manchester the first weekend she was in Missoula. Bob was a Smoke Jumper and a member of the 10th Mountain Division ski troops in WWII. They married in December of 1951.
Joanne and Bob raised three boys along with a few litters of English Setter puppies. The family loved outdoor activities and were on the go every weekend. They bought land on Big Mountain in 1951 (even before they had a lot in Missoula for their home) and built a cabin at Big Mountain in 1962. Their three sons all ski raced in grade school and high school and the two oldest ski raced in college. Joanne was a substitute teacher when the boys were in school. She was on the school board at Target Range and was an election official. Her hobbies included gardening, cooking, canning, reading, hunting, fishing, hiking and skiing. She and her husband, Bob took many overseas trips to Europe, Norway, traveled across the U.S. and sailed in the U.S. Virgin Islands with good friends. One of their favorite places besides the “Mountain House” in Whitefish was at the Double Arrow Ranch at Seeley Lake, Mont.
Joanne’s favorite saying was Uff dah! Almost every Christmas, she and Bob would prepare one their favorite Norwegian dishes, Lutefisk and lefsa or oyster stew with creamed milk. Joanne cherished the great times spent with Bob and the 10th Mountain group of soldiers, descendants, and survivors at reunions both in Europe and the U.S. She made many new friends from across the country and locally with the 10th Mountain’s Big Sky Chapter.
Joanne loved to play cards and games. She was always up for a game of cribbage or kings in the corner. She played bridge for over 50 years with the same ladies and last played in December 2021. She was very proud of the fact that she lived in her own home and was still driving at the age of 92. Joanne continued to ski into her 70s. She was a meticulous record keeper, the old-fashion way on paper spreadsheets and an adding machine with paper tape. Joanne was a staunch Republican and learned early on that you don’t talk politics at bridge games!
Joanne is preceded in death by husband, Robert W. Manchester, who died in 1999.
Joanne is survived by her three sons, Ken of Butte, Gary (Jeane) of Avon, Colo., and Dale (Susie) of Great Falls. Grandchildren and great-grandchildren include, Kelsey Kelley, husband Casey, daughters Khloe, Kambry and Kendyll; Jessi Haynes and husband Mike, daughters Isla and Navy and son Enys; Dr. Dustin Manchester, wife Rachel, daughter Elliott and son Rhoads; Dr. Josh Manchester, wife Liza, son Matthew and Nik Brown; Dani Olthoff, husband Justin and sons David and Joseph.
Cremation has taken place and her ashes are to be spread at Seeley Lake, Whitefish (Big) Mountain, Alexander, N.D., and next to her husband at Sunset Memorial. A memorial service will be planned on Sept. 17 at 10 a.m. at First Lutheran Church in Missoula.
Memorials may be made to the 10th Mountain Foundation, 133 S. Van Gordon Street, Suite 200, Lakewood, CO 80228 or the Seeley Lake Historical Society, 2920 MT 83, Seeley Lake, MT 59868.
Services are under the direction of Garden City Funeral Home & Crematory, Missoula.