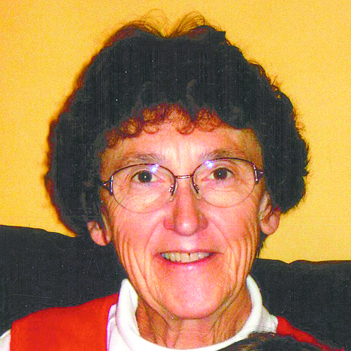 Laura Mary (Jacobsen) Rendahl, 78, died in Grand Forks, N.D., Oct. 18, 2022. Laura was born on June 13, 1944, in Watford City, N.D., to William A. and Laura (Dinkel) Jacobsen.
Laura graduated from the Mayo Clinic School of Physical Therapy in 1967, and later earned a Master of Physical Therapy from the University of North Dakota’s School of Medicine and Health Sciences. After working for years as a physical therapist in Minot, N.D., she was recruited to create the first department of physical therapy at the hospital then known as Good Samaritan Hospital (now known as the Heart of America Medical Center) where she worked until retirement.
She married David Rendahl on Jan. 12, 1980, in Rugby after they met at a Heart of America Community Concert Series concert. With the marriage came an “instant family” with two children who were then 13 and four-and-a-half years old, along with the role of a farmer’s wife. After moving to a farm 22 miles south of Rugby, she continued her work as a physical therapist while also learning to drive the grain truck, raising kids, and cooking hearty noon meals.
A third-generation beekeeper, Laura raised honeybees in bee yards scattered around the farm near fields of sweet clover, sunflowers, and the occasional few acres of flax. Her honey was sold under the label Rendahl Apiary and it was a frequent fixture at area craft fairs along with her daughter dressed as a giant bee.
Laura and David became snowbirds gradually, first spending just a couple of weeks in a southern state each winter and eventually putting down winter roots in Florence, Ariz., where they both spent their winters as long as they lived. Their annual migration to and from Arizona included stops at museums and festivals all along the way and their winters were spent volunteering, spending time with friends and family, finding new adventures, and enjoying the sunshine.
Laura spent five formative years as a child in Göppingen, Germany, where her father worked with the United States Department of State as a War Crimes Judge. Laura and David traveled to Germany to revisit those childhood memories as well as connect with relatives she found through genealogical research. She enjoyed maintaining a level of proficiency with the German language since childhood.
In addition to their travels within the United States, Laura and David traveled to Norway, Denmark, Germany, Greenland and elsewhere. They visited their daughter in Armenia. Attended their son’s destination wedding in Jamaica, and traveled with family to Mexico. Laura occasionally made references to road trips in her Volkswagen Bug before marrying David and she certainly had plans to travel more during her lifetime.
Her husband died on March 5, 2022, less than a year before her passing. Even through the grief of that loss, Laura gardened, volunteered at the Lake Region Heritage Center in Devils Lake, where Laura and David moved to from the farm nearly 10 years ago. She joined a quilting group at St. Olaf Lutheran Church in Devils Lake and took a bus tour through Duluth, Minn.; Mackinac Island, Mich., and other sites in Wisconsin, and Minnesota, just weeks before her transition from the earth.
She was admired by friends and family alike for her skillful hobbies, whether photography, weaving, or playing piano. She cultivated a robust vegetable garden and cut lilacs for the home each spring. Her interests were endless and never ceased expanding and deepening. She prided herself in remaining mobile and independent even as Multiple Sclerosis sought to slow her down.
Her community service included serving as an election judge in Esmond, N.D., a board member with Rugby’s Sons of Norway Odin Lodge, a Girl Scout Troop leader, and a board member at the Pinal County Historical Museum in Florence, Ariz.,  among other ad hoc service leadership roles, such as spearheading the 100th Centennial of Fillmore in 2012. And an effort to raise funds for and install an elevator at Bethany Lutheran Church in Rugby, so that everyone could access both worship and fellowship.
She is survived by her son, Randy Rendahl (Rebecca); and two grandchildren, Carson and Sydney; daughter, Dr. Kristi Rendahl; sisters-in-law, Laurel Engelmann, and Robbin Rendahl; niece, Brenda (Rendahl) Dellaneva; great-niece and nephew, Haley and Anthony Dellaneva; and her niece, Erika Dinkel-Smith. She was preceded in death by her husband, David Rendahl; her parents, William A. and Laura Jacobsen; her brother, Dr. Bill Jacobsen, Jr.; her brothers-in-law, Stephen Rendahl (Robbin) and James Engelmann (Laurel); as well as other members of the Dinkel and Jacobsen families.
Funeral services will be held on Nov. 5, 2022, at 11 a.m. at the Niewoehner Funeral Home in Rugby, N.D. A reception will be held at the Coffee Cottage on Hwy. 2 following the service. Burial will be at 2:30 p.m. at the Fillmore Lutheran Cemetery. Visitation will be held at the funeral home on Friday, Nov. 4, from 3-5 p.m.